Futures of Autonomous Vehicles – Car as a Social Third Space

Explore the possibilities of the autonomous cars as a third space beteween home and work. Define a concept for the future of FCA autonomous vehicle’s user expereince.

A concept for autonomous cars as a social space. An exhaustive exploration of futures by particapatory design methods. New research methods for FCA’s UX team.

How is everyday life completely different because of FCA’s autonomous vehicle?

How do the different product systems and their brands affect the overall user experiences and expectations of people?
What new analog and digital surfaces, materials, and devices populate these spaces?

How can we better connect people with the cities they live in?

When cars drive on their own, are people still just going to be on their phones? 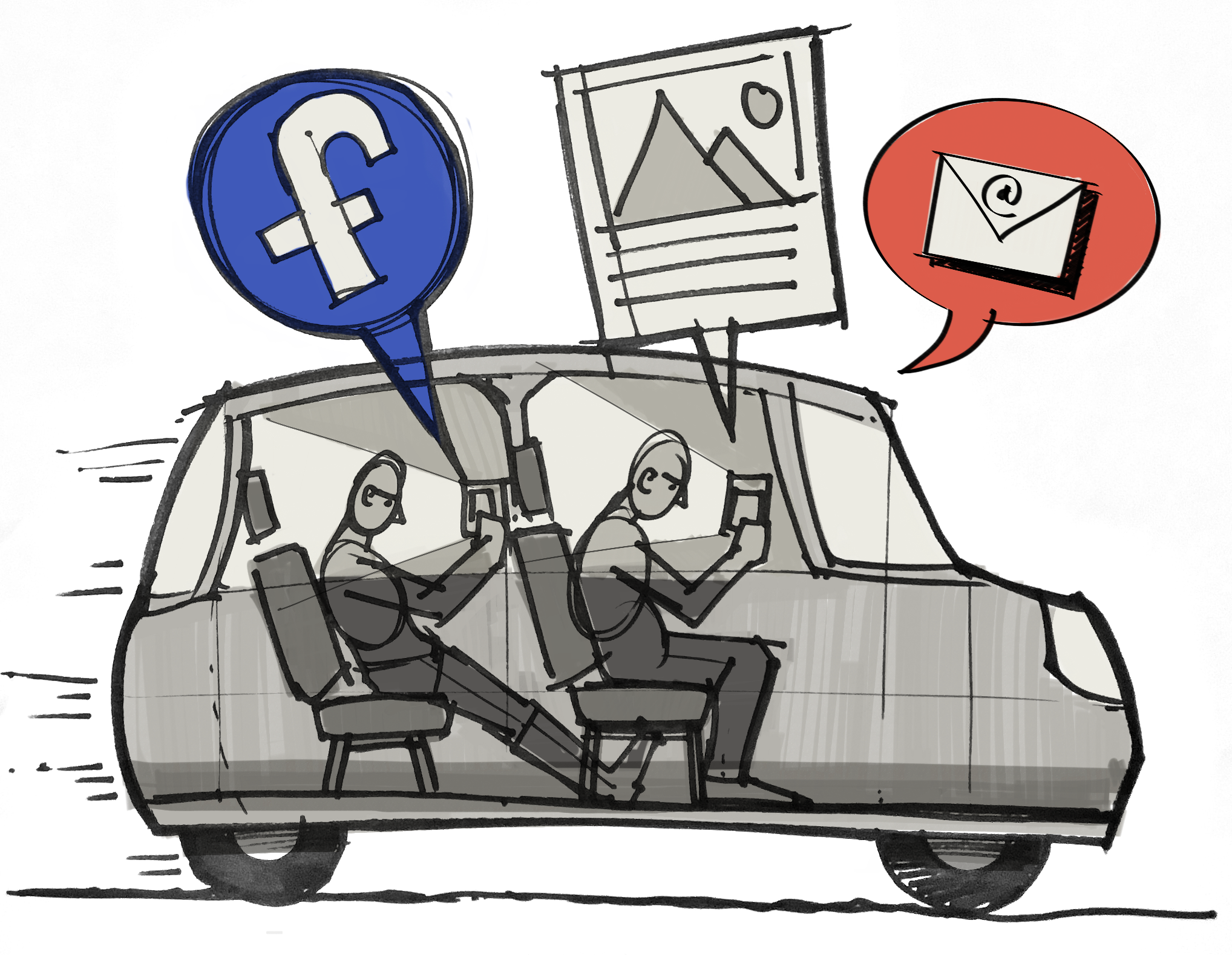 We’ll get our time back, but we’ll be disconnected from our city.

Most autonomous car concepts, from Ikea to Volvo, focus on giving time back to the user. In doing so, the user can completely tune out from their commute and become out of touch with their city. With everyone busy working, sleeping, and watching more TV, who would enjoy their journey looking out the window? 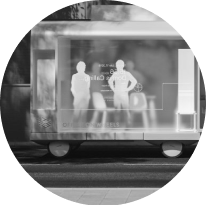 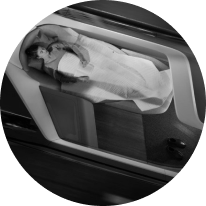 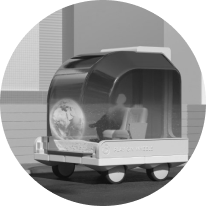 Connecting people to their city by driving through a local social media feed.

An interior mock up for Citymoji 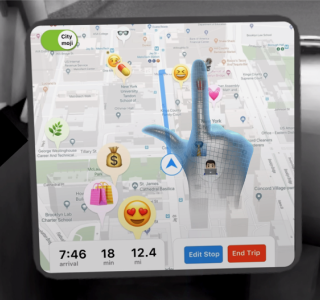 User will be able to interact with story emojis by tapping on them and hear a more in-depth story. The story will be in the form of animoji recordings inputted by previous riders. User can also choose to explore the location by adding it to the trip stops. 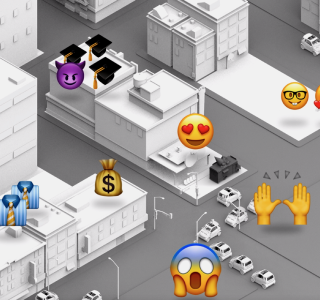 Supported by ride-hailing companies, Citymoji will first collect data during people’s daily rides. After sufficient data is collected, the city exploration feature will be supported for riders to learn more about the neighborhoods and connect. At the same time, Citymoji will also provide paid analytic tools for government or businesses to process the data.

In the long term, citizens will benefits from improved city planning and a thriving local businesses scene.

Talking with someone in their car is like talking with them in their home. The car is a highly costumized and personal space that shows the owner’s personality. This may pose some barrier to trasnsitioning from an ownership model to a shared model.

What does the car space mean to people?

To get the project grounded fast, I approached 5 people randomly in the parking lot to take a picture of their car interior with the general question of “What is their favorite memory of being in a car, and why is their car the way it is?” Most people responded by an anedote of an important conversation they’ve shared in the car. We decided to focus on how the car space can act as social third space, and conducted an in-depth interview five additional additional participants while they’re driving or riding in the own vehicle. 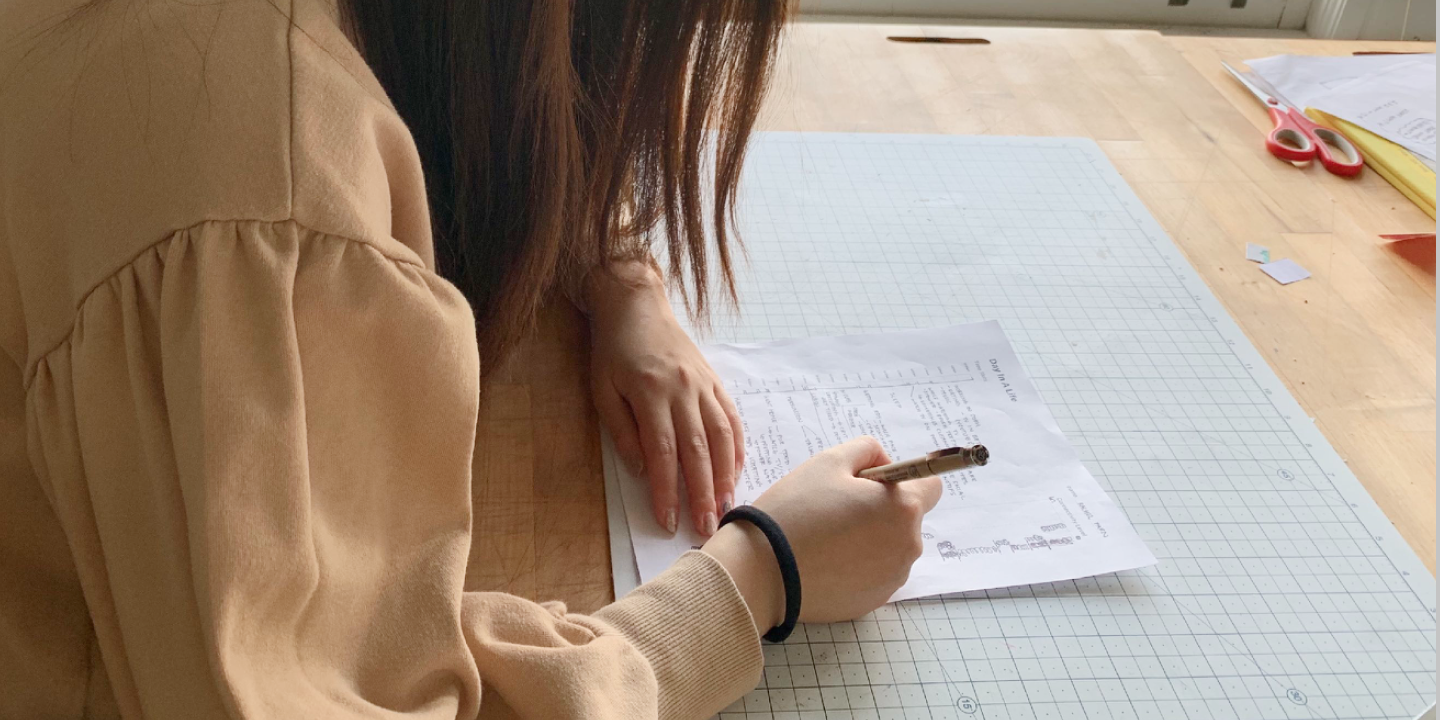 People feel most “connected” when they’re collaborating or exchanging information both proffessional and personal. Routine tasks alone are when people feel least connected to others, but most connected to themselves.

When do people feel most connected during their day?

We ask participants to map out their activities in a timeline, rate connectivity level and provide explanations. To better understand when do participants feel most “connected”, the wording is intentionaly vague as to better undesetand what people think feeling connected means. Does it mean connected to oneself, to one’s family, or one’s environment?

An overview of each participants day and when they feel most connected. 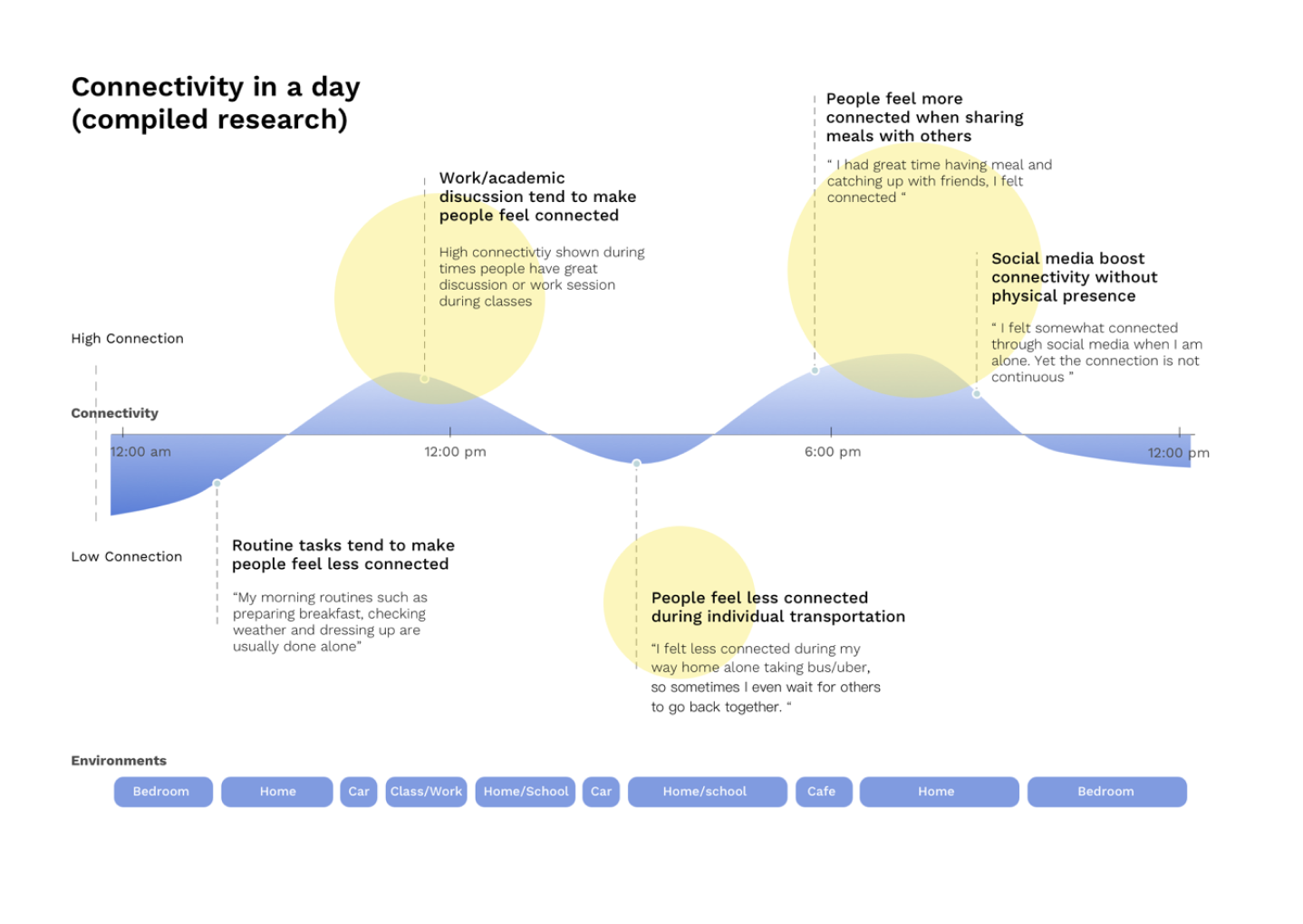 There’s a limit to what we can learn from observing people saying and doing. By creating a tool-kit that enables people to make with us, we can empathize and create a deeper shared understanding of their vision.

What does “connecting” looking like in an autonomous car?

We invited participants to design a moving space and its environment with foam core car and wooden blocks.  Participant were ask to think out loud during their design process and describe the space they designed after they finish by “vlogging” about it. Lastly, particpants were asked to to take a picture of their concept that best represents it and give it a name.

Concepts named and photographed from the angle to best represent it by the participants. 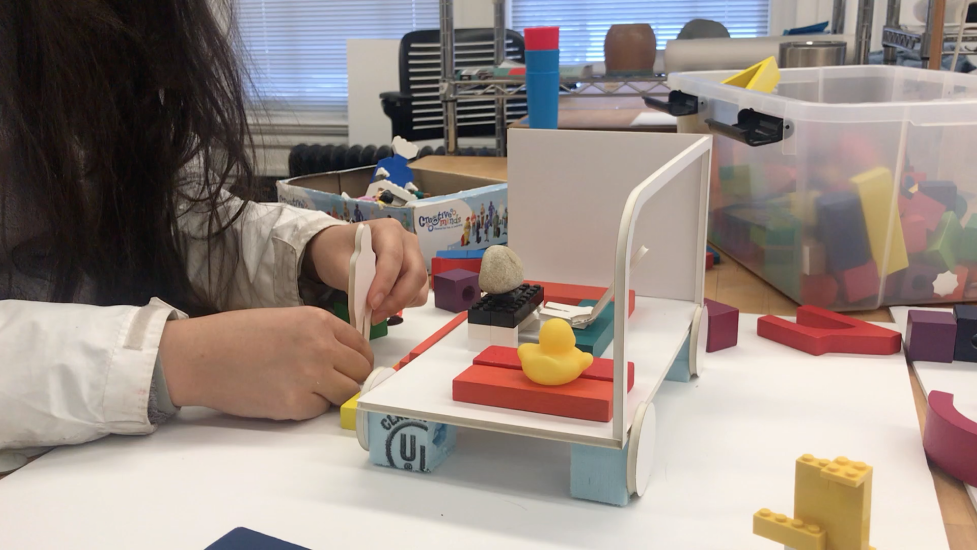 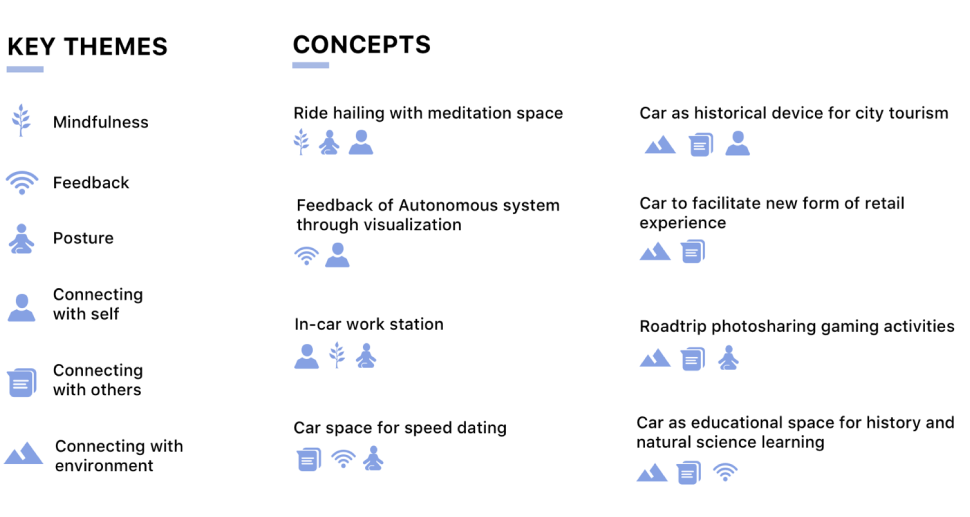 Concepts we’ve synthesized from our research

Research and Making in Parrarel

Through out the whole project and even during research we generated concepts. Sometimes when asked to imagined, participants simply re-created an existing concept they've seen elsewhere.  We refined their visions into storyboards to crystalize our understanding as well as to push the boundaries of their imagination. 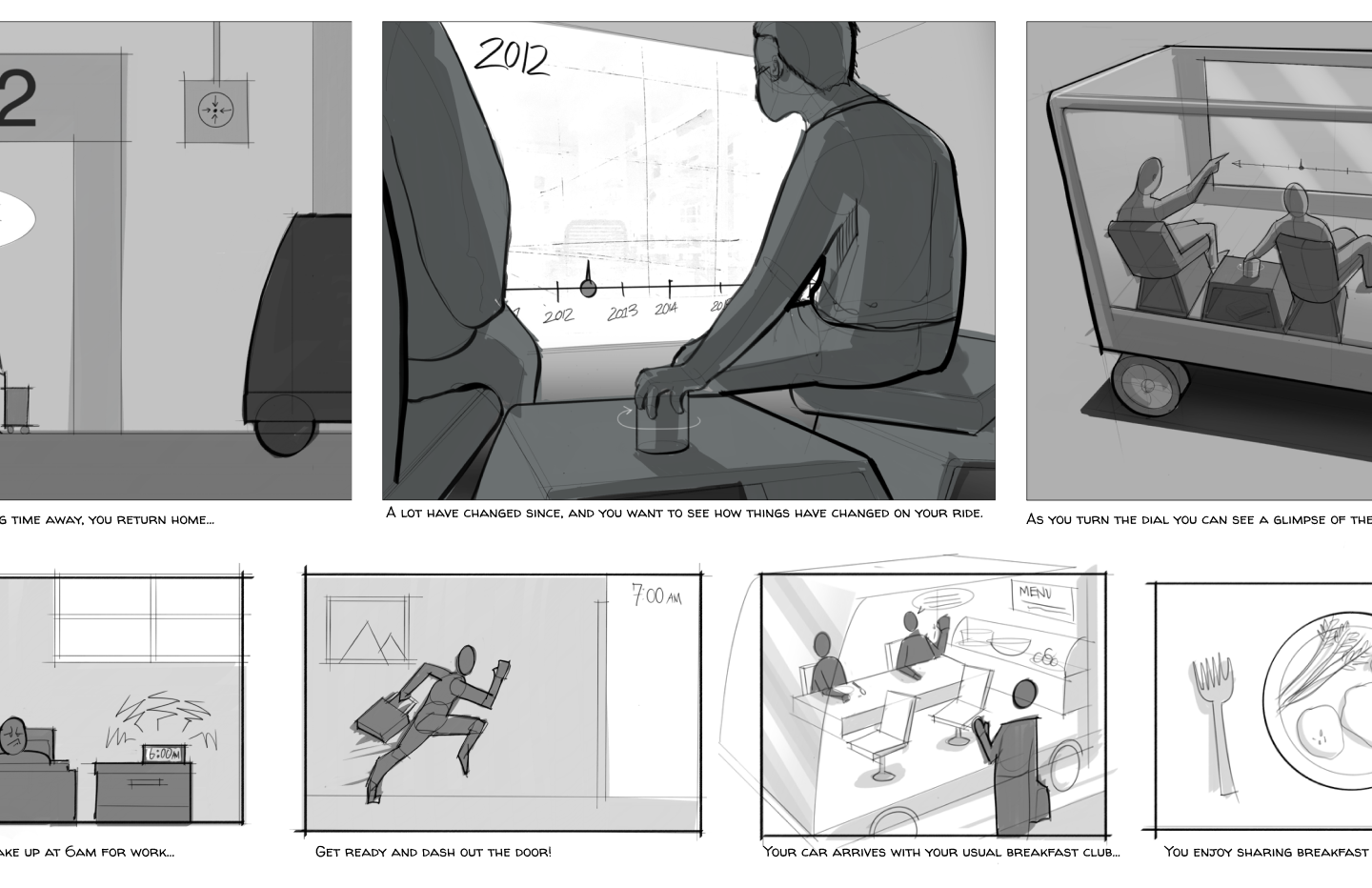 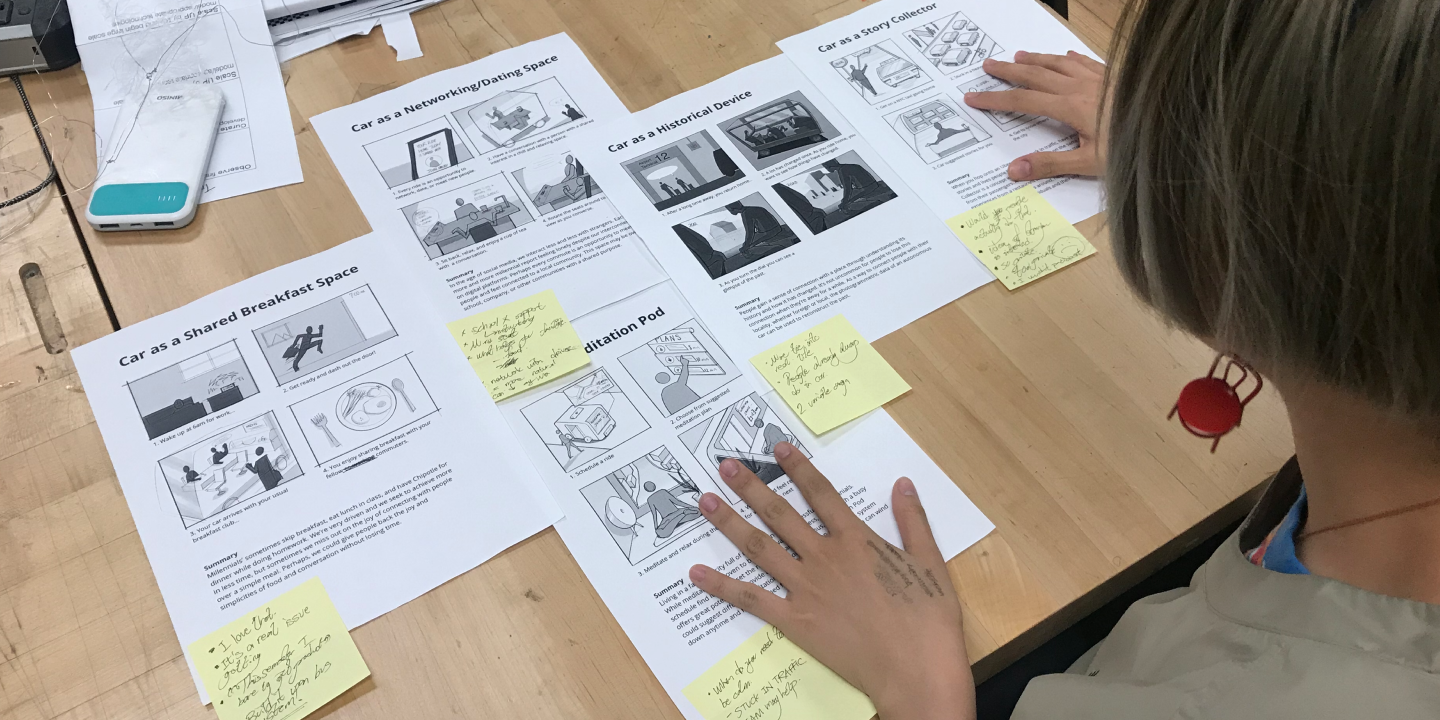 We evlauated the concept by asking our participants to think aloud while sorting the storyboards in order of their preferences. Afterwards, we quantitatively and qualitatively assess each concept based on their controversialness. And lastly, with close consultation with our client we deicded to select concepts that would require us to a take genuine risk as to not repeat already existing concepts by IDEO or Ikea. 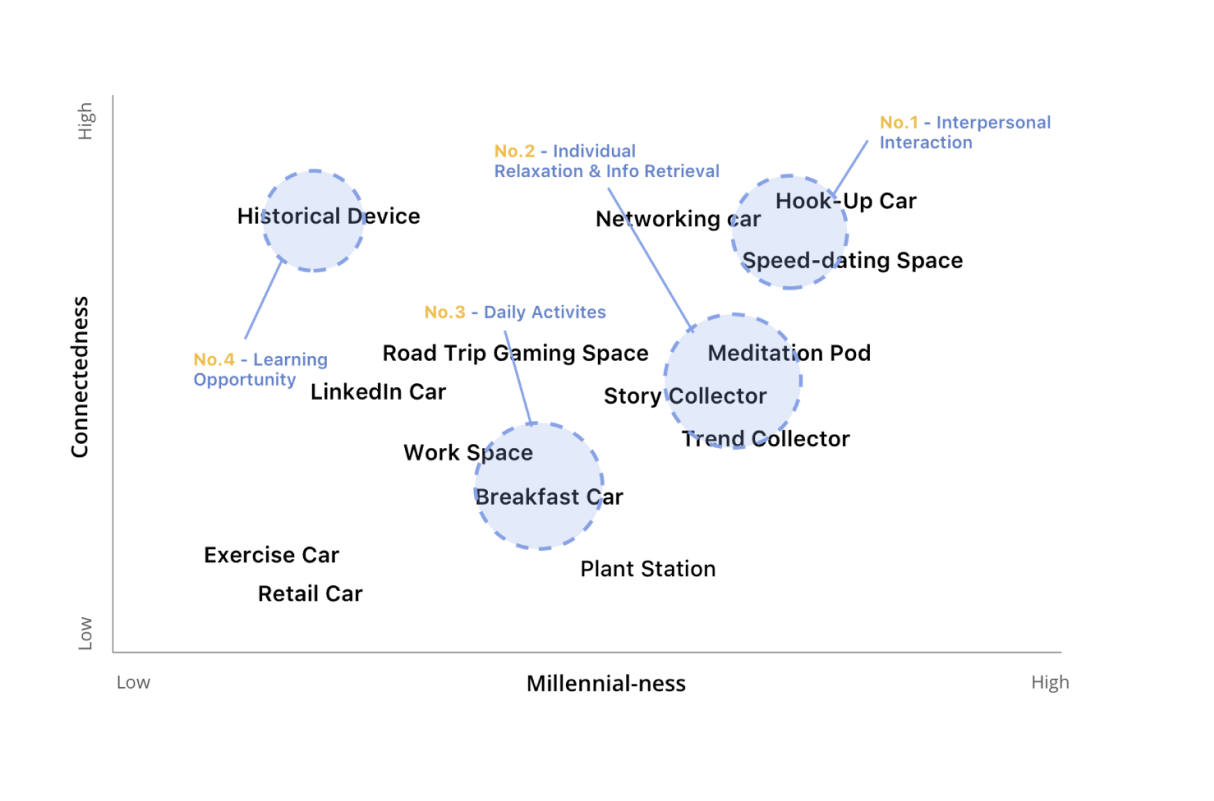 Qualitative analysis of our speed-dating 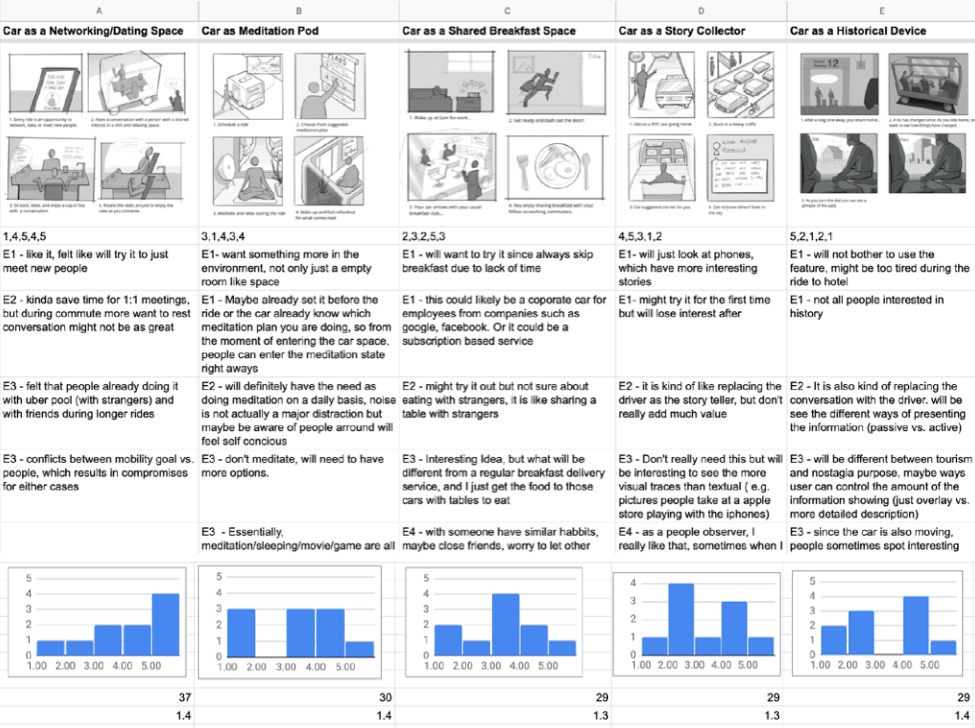 Quantiative analysis of our speed-dating

Take exploratory risks. From IDEO to Ikea, there are a million autonomous vehicle concepts. With close consultation with the client, we decided to take a risk and explore novel concepts we haven’t yet seen.

Habbits are difficult to break, but easier to evolve. During the down time of most commute, people are using this time to connect and catch-up via social media. Though social media can helps us connect with people anywhere on Earth, rarely is it used to heighten one’s connection with one’s locality. In an effort to help people better connect with their city,  we’re evolving people’s habbit by transforming the autonomous ride into a local feed. 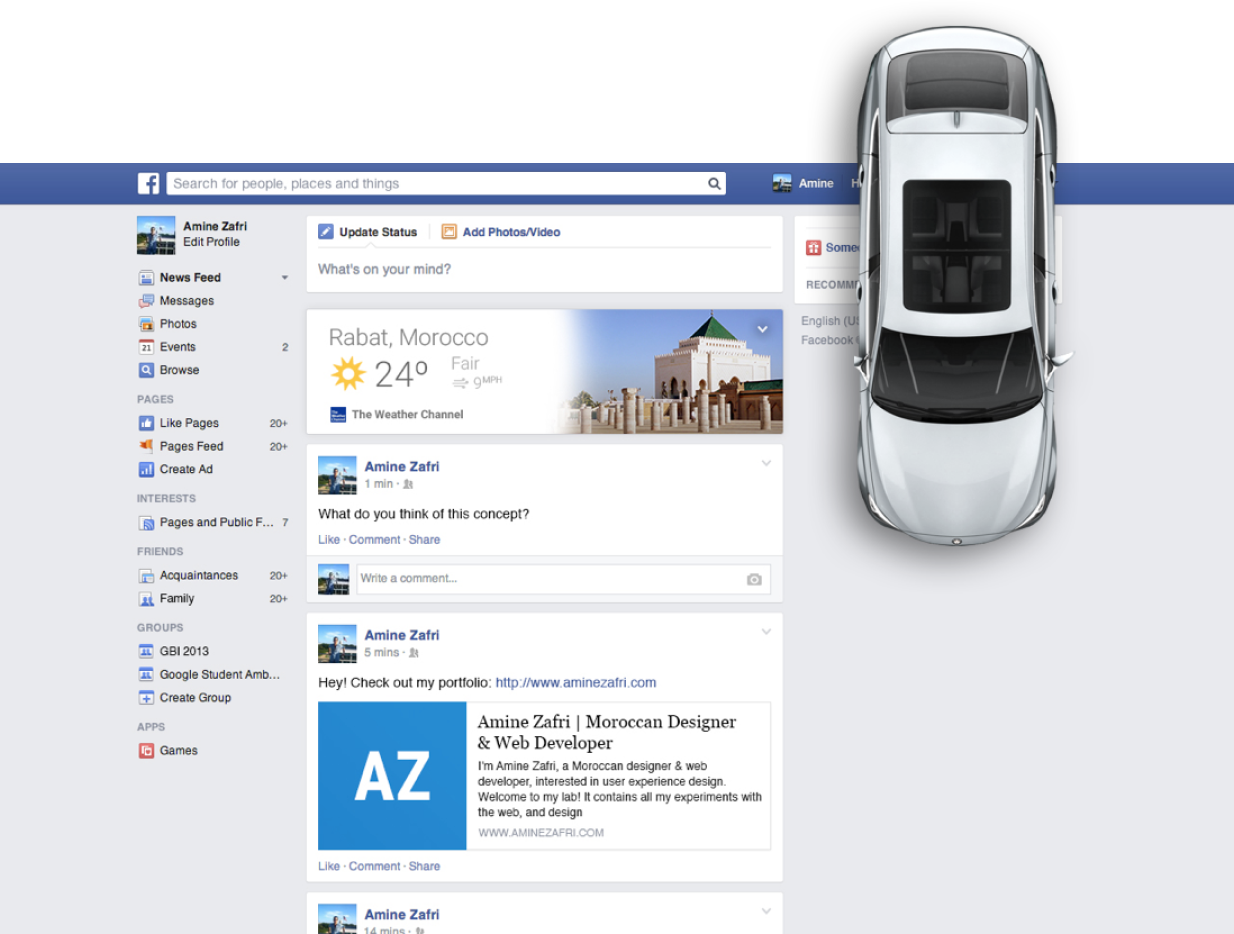 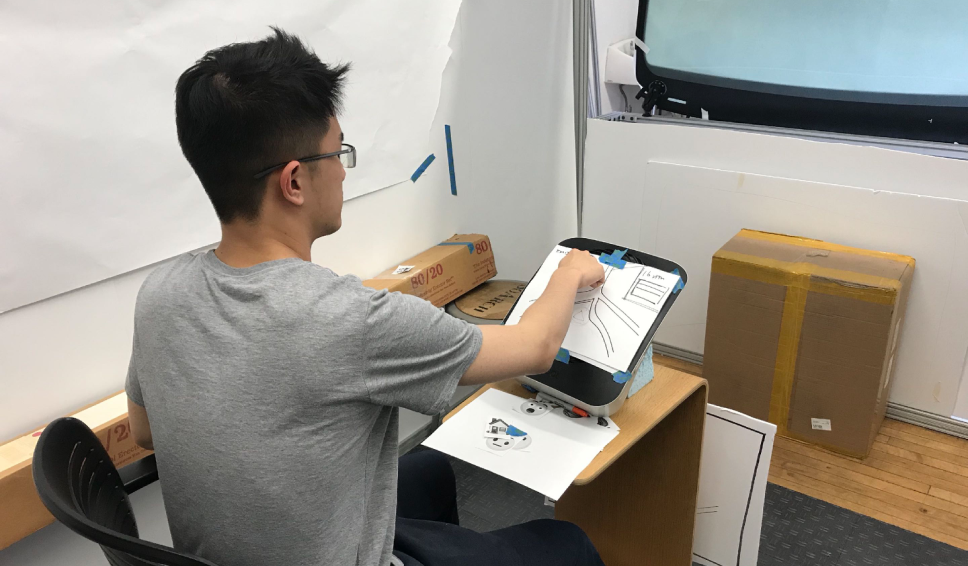 Mocking up our in car interaction at 1:1 scale

In order to communicate our concept, we prototyped in the supporting interactions. Our interaction is based loosely on the current UI of the main screens of Tesla cars. 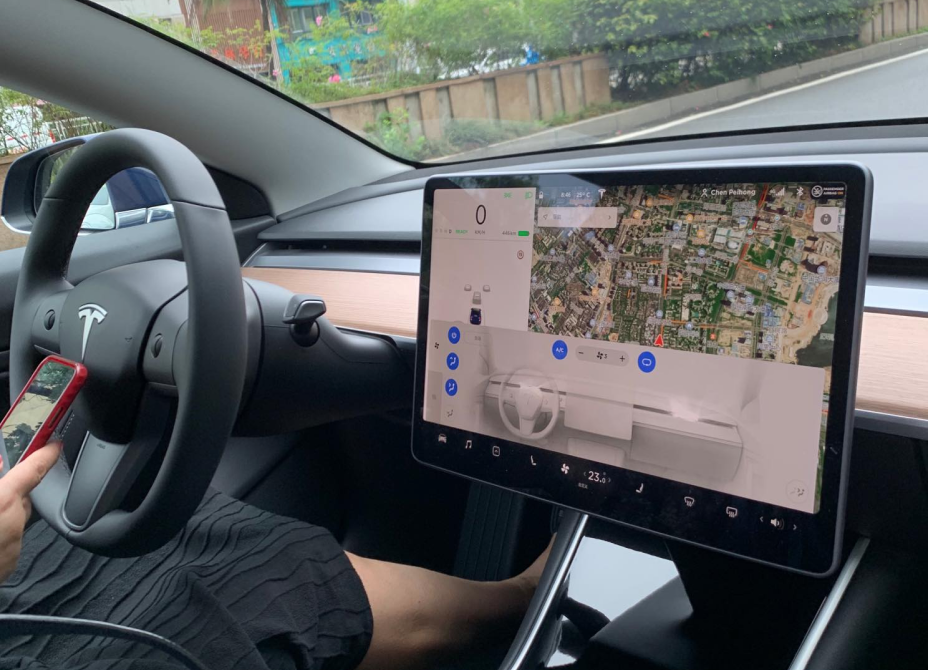 A screen inside a Tesla 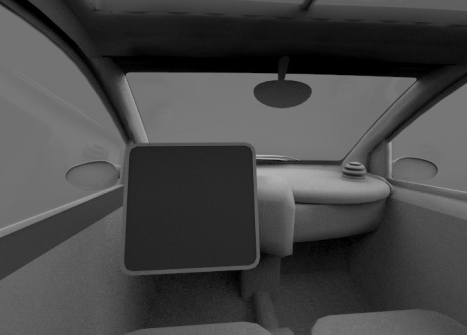 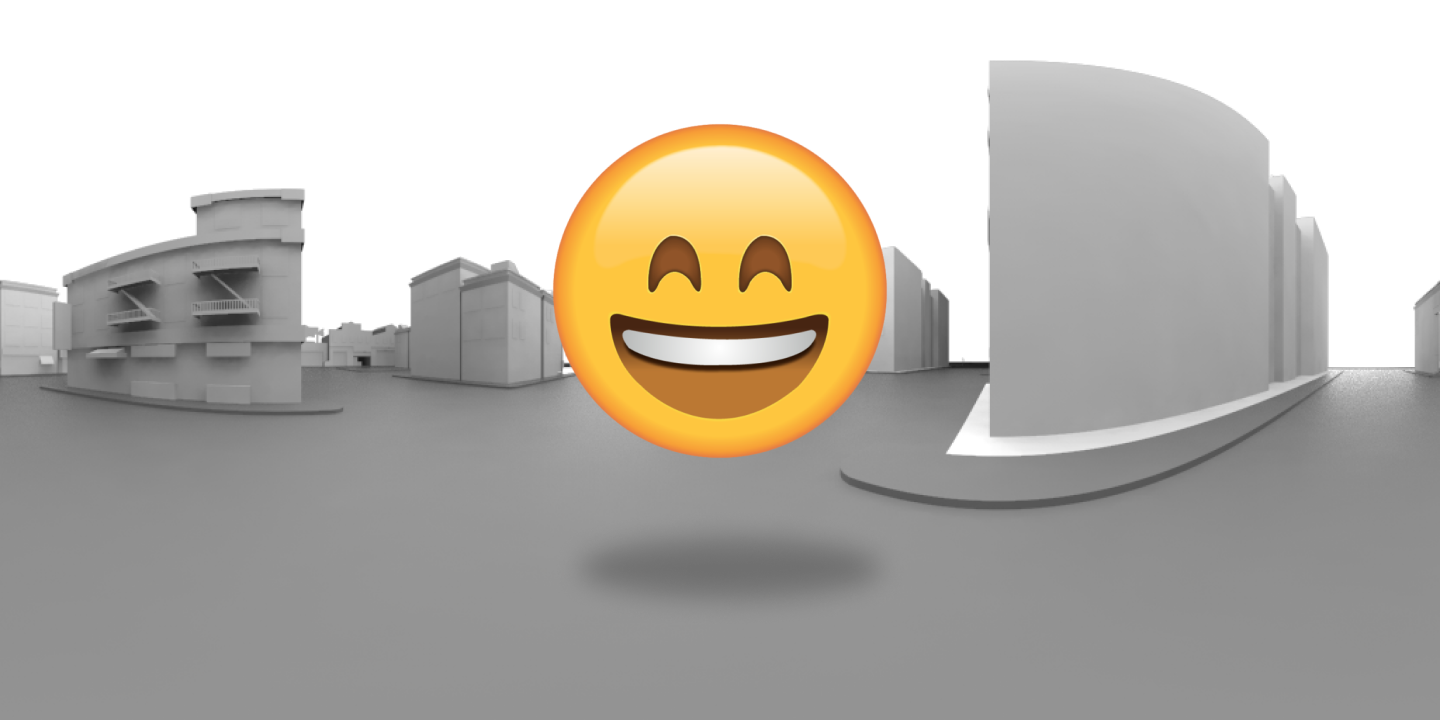